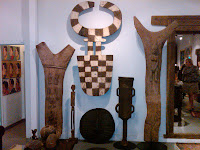 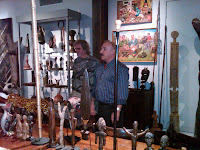 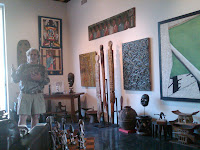 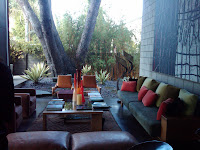 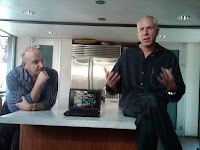 Saturday I and 19 others had an exciting adventure into the world of art and architecture in Los Angeles led by my head Gitano, Edward Goldman. We started the day with a visit to the amazing home of Steven Erhlich. Steve is a huge name in the architect world of LA. He has designed many residential as well as commercial structures. Through our Gitano, we were fortunate to be invited to visit his private residence. He effortlessly explained the design and thought process behind the construction of the home with an emphasis on making his home green (lessening the impact on the environment) and he designed it beautifully. It felt like a real home, where a lesser architect may have had a just a beautifully constructed building, the final result of this residence is warm and inviting. It's modeled after LA mid-century modern, glass, wood, steel and concrete. Oddly enough you'd think that would leave the space a bit cold but it was very warm, due I think to the materials that were selected to build the house. The materials are all natural, the beams are left exposed to rust, leaving it a beautiful red/brown color, the wood beams are dried and glued sawdust, none of the walls are painted, they are naturally white from gypsum, the concrete floor has been mixed with some natural color of chestnut brown that really warms up the environment. There is no airconditioning and the heating units (water based) are under the floor. The indoor outdoor living style was a main concern to the architect. You can walk straight through the house to either east or west directly outdoors. There is the guest house and studio on the other side of the garden.
We left Steve's home and we visited the house of Earnie Wolfe and his wife Diane. Steve was the architect for their home as well and you can see his influence. It's a great structure in an unusual part of Los Angeles. It's an almost barnlike structure but actually the references are from Africa. I should state here that both men have spent considerable time in Africa and are heavily influenced by the architecture and spirit of the indigenous cultures they are acquainted with. Earnie's house is filled with treasures from his trips abroad and his overflow from his gallery. His home has an open flow from the kitchen to outdoor pool with a final view of a wall of greenery with a splash of bougainvillea. It's a natural work of art. A huge sliding glass door separates his living room space from his patio. His walls are filled with contemporary art by local artists who are also his friends, surrounded by tribal art sculptures. After lunch and a short talk about his private collection we went over to his gallery where we were treated to an extravaganza of contemporary African artwork, paintings, recalling the recent election of our current president. The second part of the gallery is brimming with traditional tribal art. Wonderful old ladders from Mali, masks from Dan, Baule and Igbo peoples. Monetary figures that mounted, look like metal cuffs. Fabrics, containers, and beaded furniture, my head was swimming thinking about having a fourth of those pieces in my private collection. The day ended with Earnie telling us a story from his time in Kenya, like when you could travel without the fear of kidnapping and connectivity to the outside world.
Posted by Brenda G. at 3:57 PM