Art of the Movie Poster 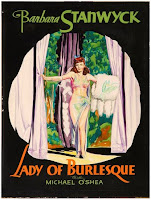 Last weekend I visited the Academy of Motion Pictures Arts and Sciences to see a wonderful show called the Art of the Movie Poster: Illustrated one-sheets and design concepts from the Paul Crifo archive. The image posted with this blog is "Lady of Burlesque," with Barbara Stanwyck, 1943, is courtesy of Herb Bridges, and is not from the show at the academy, but I wanted to give a representation of the type of work done by the studios fine artists and illustrators.

The show covers the decades between 1950's and 80's and exemplifies the creative processes by which a finished movie poster was achieved. The show follows each stage of the process, from reference stills to concept sketches, hand rendered and photographic 'comps' which incorporate the graphics and the texts. Many poster styles were represented alongside the final 'winning' posters which are from the personal collection of poster designer Paul Crifo and the Academy's Margaret Herrick Library. Crifo studied illustration at Pratt University in NYC and worked on more than 400 motion picture advertising campaigns and personally designed 120 film posters for Hollywood studios.


The Crifo exhibition showcased the completed posters and the preliminary design artwork done by art school trained craftsmen working within studio advertising departments or advertising agencies. Only a fraction of his work was shown, and just to list a sampling, "Separate Tables", "Tom Jones", "Mahogany", "In the Heat of the Night" and "The Producers". It's very interesting to examine mind of the artist by exploring the choices of visual elements of a movie marketing campaign. When you look at the selections of some finished posters you begin to wonder why a work was selected over another. It was a wonderful opportunity to visit a show where you could see firsthand works in progress and the finished result.

Collecting Vintage Posters
Vintage posters were originally designed for use as outdoor advertising throughout Europe; they began appearing in large numbers in the 1890’s and onward. Today, these original lithographs are eminently collectable, given their limited supply and appreciating value.

Posters are recognized as a genuine and desirable art form that expresses the many artistic periods from Art Nouveau through Art Deco and Modernism. They are available in a wide variety of subjects, colors, sizes, and designs. Posters are increasingly popular with both individuals and corporations and they add a perfect accent to your home or office!

Reissued (Re-released) movie posters are sometimes a good way for collectors, who don't have a lot of money, to own a poster from a favorite movie. Some reissue posters are less colorful, but often they are just as colorful and have better artwork than the original posters. Be careful of reprinted posters. These are posters that were printed for fans and collectors of movie art, and not actually displayed at movie theaters.