Art and Civil Rights at the Getty Center

The National Council of Negro Women, Inc., in collaboration with the Getty presented the film Legacy: Black and White in America and Panel Discussion at the Getty Center. This is a part of the ongoing special program "Arts and Civil Rights" that is happening around town for the next few weeks. The filmmaker Richard Karz is an independent documentarian. He gathered as many of the early civil rights leaders and current activists for a luncheon in Washington D.C. to discuss the past, present and future of civil rights movement. It's a very interesting and telling work that revisits the discussions that are being had around the country today. Legacy includes Marian Wright Edelman, Deborah Roberts, Rep. John Lewis, Condoleezza Rice, Wynton Marsalis, Mayor Cory Booker, John Singleton, Madam Madon, Andrew Young, Rev. Joseph Lowery, John Hope Franklin, Orlando Patterson, Manning Marable, James Cone, Joseph Ellis, David Driskell, Ira Berlin, James O. Horton, Roger Wilkins, Allison Samuels, Bill T. Jones, and a special dinner tribute on Capitol Hill to the civil rights generation hosted by the Smithsonian’s National Museum of African American History and Culture. 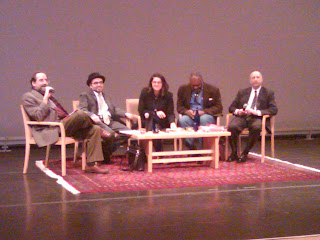 After the film the panelist took the stage.  Lawrence Weschler, Daniel Joseph Martinez, Nizan Shaked, Kerry James Marshall, and Richard Karz had a discussion that was lively, with some tense moments between the audience and the panelists, but very, very informative.
Posted by Brenda G. at 11:26 AM