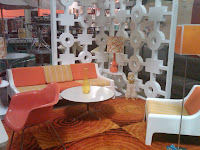 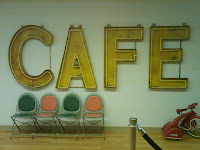 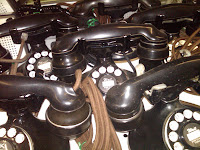 A few Saturday's past, I spent the entire day with the Set Decorators Society of America. This event was an opportunity for interested parties to see behind the scenes of set decorating as well as pitch career opportunities and membership to the organization. We met at CBS studios around 9am, networked and mingled over bagels, danish and coffee until the group swelled to over 50 people. Around 10am we were gathered and walked over to the first set of a new show starring, Jenna Elfman called Accidentally on Purpose. One of my favorite new comediennes is on the show, Ashley Jensen. She was a smash on Extras with Ricky Gervais. Anyhow we met the set decorator, Mark Johnson. He would be wonderful to work with. He's very serious, charming, and clearly knows his business. He took over from the pilot episode set decorator, who graciously participated in the discussion. The set was very interesting, the premise is a single successful woman, who lives alone and becomes preggers after a one night stand. The one nighter moves in and they start sharing space. Not sure what the script called for in terms of feel, but after watching this weeks episode I think the decoration fits perfectly. Next we saw the set of Gary Unmarried. This show is about a single, recently divorced man, who is a sports announcer. The set decorator is a woman who has so much experience it was amazing. Another super capable individual. Her name escapes me which is a pity. The set was very masculine but homey. Next we saw the set of CSI:NY. UBER high tech look. Lots of glass, stainless steel, flat screens, wall screens, and chic office spaces. Really cool. Gary Sinise's office was crazy. He is a serious republican and his set office was filled with republican stuff. I liked that touch. The set decorator here is also a woman, Cindy Coburn who has been decorating this set for 7 years. She transferred from CSI:Miami. Great stuff. We visited the set of Greek, on ABC Family. The set decorator is Tara Stephenson. Not much to say about this set. It's college, it's messy, it's dorms, it's fraternity and sorority houses. It felt right even if a bit low budget. But she was the decorator on That 70's Show so she's alright with me. Last but not least, we visited the set of The United States of Tara, from Showtime. This set is decorated by Beth Wooke and she did an awesome job. She told us a story about only being in the business 5 years. Really? Well she must really be connected. But that isn't to say that she didn't get the job on merit. This place feels like a real home. All the touches are so subtle you could literally move right in. A special shout out for the job she did in the sons room. Amazing. Brilliant. Not sure if the show will make it past next season but the set decoration deserves any nominations it can get. We broke for lunch and left the CBS studios to drive to north Hollywood to visit the first of 2 prop houses. The first on Tujunga Blvd. is called History for Hire. Awesome place!!! These guys have everything! I mean everything from the 1920's until the late 70's and probably a bit into the 80's. It was a joy. From there we went to 20th Century Props. OMG!!! A delight of 60's colored furniture and things. See images from that stop. All in all I had a blast and look forward to being affilitated in some way with this organization.
Posted by Brenda G. at 2:48 PM